Join Us for Beauty and the Beast!

The cast of Beauty and the Beast, Jr. would like to invite all Murch students, family members, and friends to see our production of the Murch Spring Musical. There are two performances only. Tickets are on sale now, so order today!

Cast Members: Are you looking for all of your information? Click here! 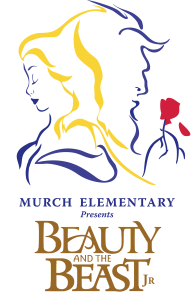 An arrogant prince is cursed to live as a terrifying beast until he finds true love. Strangely, his chance comes when he captures an unwary clockmaker, whose place is then taken by his bold and beautiful daughter Belle. Helped by the Beast's similarly enchanted servants, including a clock, a teapot and a candelabra, Belle begins to see the sensitive soul behind the fearsome facade. But as time runs out, it soon becomes obvious that Belle's cocky suitor Gaston is the real beast of the piece.