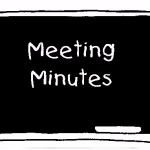 Co-President Maggie Gumbinner called the meeting to order at 7:04 pm on January 12, 2016 in the library of Murch Elementary School.

Other Members in attendance:  Christine LoCascio, and Virginia Marentette.

2. Approval of prior minutes – Brendan Holland

a.  Enrollment. Mr. C. is sick, but passed along that DCPS has not yet finalized the projected enrollment numbers, and we do not expect them until the end of the month.  Maggie explained the enrollment projection process briefly, which includes the district presenting an estimated number, Mr. C. giving feedback, and then the enrollment figure is finalized.  It is a particular challenge this year as we try to account for changes next year with the renovation.  On a related note, Ron noted that the recent open house was well attended by new, in-boundary parents.

a.  Tree mulching.  Martha reported on the tree mulching fundraiser, which raised $443, about $200 more than last year (when it rained).  Martha extended thanks to Branches Tree Experts, and noted that NBC News Channel 4 covered the mulching event in the 11 PM news and did a video report of the event.  Got a lot of suggestions from volunteers for next time.  Discussion came up amongst the volunteers at the event that next year we may not have space at Murch for the event.  Martha mentioned that one of the former Hearst HSA members happened to show up at the event and was excited to explore the possibility of Murch continuing the event next year at Hearst.

b.  Auction.  Virginia Marentette reported that donations are coming in and planning and work on the auction is progressing.  One significant change this year is that we are moving away from having ads (in the auction book) and moving towards sponsorships.  Moving to more of a philanthropy ask than a marketing ask to businesses.  Virginia asked that folks please try to help to spread the word to law firms, businesses, etc.  Sponsorships range from $250 to $2,500, but auction chairs are willing to discuss potential sponsorships with any interested businesses.  Virginia also noted that they are planning on sending a letter out to pre-K through 2nd families, who are potentially newer Murch parents and auction newbies.

The auction will see several other changes this year, including a move to electronic bidding, and a new website to handle tickets, donation of items, automatic e-receipts, all of which will result in a streamlined process.  This year you will be able to bid electronically and set max bids and alerts, like eBay.  Noted that Janney made $30k more than their previous auction, due perhaps in part to their move to a similar auction/bidding system.  Virginia noted that we are changing a lot, and we’re hopeful that by changing to electronic bidding, sponsorships, etc., that it will streamline and help in the future even if there is no immediate financial gain this year.

A brief discussion ensued regarding sponsorships, and Lisa Stone noted that Lafayette has (or has had) sponsors of their HSA for the entire school year, which affords the sponsor access/exposure to a number of school events/activities.  Speculated that if the auction sponsorship works well maybe some of these same entities might be interested in an annual sponsorship of the HSA.  In addition, Sharon Bennett suggested that vendors with whom we work may be sources of potential sponsorships.

A further discussion was had regarding the fact that the budget and anticipated revenue for this year’s auction is similar to last year and that we’ve not changed the messaging for the next auction year.  It was discussed that there could be a need for additional flexibility going into the renovation years, and that while there’s not yet been any specific fundraising to assist with renovation year contingencies, that could be a focus of auction messaging/fundraising going forward.  Discussion also touched on whether this year’s Paddles Up campaign might focus on a reserve to help with swing space.  Or perhaps we could think of a way to build in a reserve for community cohesion.  It was noted that there are a number of unknowns in the renovation years and that additional money may be necessary for unforeseen expenditures.  In addition, Maggie noted that as student numbers go down and school budget goes down, there may be changes in spending that we want to augment/offset.  It was also noted that we may need to budget for storage and moving to preserve materials the HSA has already invested in, in order to make sure that things don’t get lost in the move.

c.  Dates.  Martha noted that this Thursday is sponsorship night at Potomac Pizza.  Friday morning is a coffee with Mr. C.  Also career day is Jan 22nd, so take a minute look at the type of jobs, look for sign ups.  The Talent Show will be Feb. 5th.

A brief discussion ensued about the dates for the Murch Spring musical and making sure that it gets on the Deal calendar, which Lisa is in the process of securing.  Also a brief discussion about graduation and perhaps mentioning/reminding Mr. C., as in the past Murch as sometimes held graduation at Deal or Wilson, and it would be good to secure a spot on their calendar.

d.  Staff Gifts.  Maggie followed up on the collection of staff gifts at yearend.  They collected approximately $2,300 for staff gifts for approximately 40 staff members (some of whom are part-time).  This translated to about $60 per staff member.  Maggie reported that the plan to collect and disburse gifts hit a slight hiccup, which was that you can no longer pay for Visa giftcards with PayPal.  Accordingly, Maggie bought Amazon cards herself and transferred money to her own PayPal account.  This succeeded in keeping the money separate from HSA funds, but required that Maggie get personally involved.  Members noted they were most appreciative of Maggie stepping in to make this work, but it was discussed that we need to consider how to handle this issue in the spring and going forward.  Wanted to be sure to discuss how it went this time and discuss how to handle it in the future.  One possibility would be to budget and collect through the HSA, for example to specifically collect for a holiday fund.

a.  JoAnna provided the monthly report on the HSA’s financials.  [See handout materials.]   JoAnna went through the numbers from December and compared to fiscal year.  Highlights from this month include revenue from the book fair, and collection of $5,600 from SOS campaign, which brings us up to $74k cash in hand from SOS.  Still more SOS revenue coming, perhaps an additional $30k in cash and pledges to come.  The largest expenses in December included salaries for classroom aide, as is typically the case.  Expecting additional revenue coming with auction.  Lisa also noted that we’re switching credit card vendors for the auction and JoAnna confirmed that she will now cancel the former vendor.

b.  Manolis reported on teacher grants:  20 out of 22 grant requests were approved, two grants were denied, including one training program that was withdrawn and one for the library, which was also withdrawn.  So all requests from classroom teachers were approved, for a total of $9,200 in teacher grants.  A full list of the grants and amounts will be included in future HSA materials.  A second round of grants will be coming, with the application window open between 1/15 and 1/30 with decisions after that.

a.  Spring Musical.  Lisa Stone reported on the upcoming Spring musical.  We’ve received that proposal from Adventure Theater to run the Spring Musical.  Came in at $12,530 for their fee, which includes four staff (director, chore, stage manager, asst. director) run all rehearsal and creative direction.  Proposal is to have rehearsal two days a week for a several weeks for a 50 hours total.  We have reserved Deal Middle School auditorium for May 21st.  The plan is to have a show on Friday evening and a matinee on Saturday.  The stage set is likely to be less grandiose than last year’s set; Adventure Theater does a more streamlined look.  Goal is for a cast of 25-50 people.  Working to make less onerous and more sustainable, focusing on grades 3-5.  Martha added that once they know the number of participants, every actor will get some lines and participate.  Working to decide on a recognizable title and will coordinate with the Adventure Theater to develop, if we secure their services.  One topic that came up with Adventure Theater was the suggestion of requesting a participation fee of $20 to $25 per participant, on par with other after school activities.  Could encourage participation and ensure greater commitment by the student participants.  And in addition to the Friday and Saturday performances, they would also try to schedule an assembly to perform a portion of the musical during school so kids can all see some.

It was discussed that the fee for Adventure Theater is not the only fee involved.  Other costs include the printing of the playbill and Deal fees.  Lisa estimated that a proposed budget should be approximately $14,500.  Currently, we have $3,000 budgeted for the musical and there is an additional $4,500 in the Peter Berry Fund for Musical Productions.  In addition, last year’s production brought in an additional $3,500 or so from pizza sales, ticket sales, and ad sales.

A brief discussion ensued regarding a participant fee and also the possibility of requesting that the participants and parents seek to engage in fundraising for the event to offset the cost and contribute a targeted amount.  The board decided not to suggest a fee per student/participant, but rather to ask the families of students involved in the musical to raise a reasonable amount (potentially $3,500 to $4,000, on par with last year) through ticket sales, pizza sales, advertising in the playbill, etc.  Lisa and Martha intend to meet and discuss with some parent volunteers in advance of signing up with Adventure Theater.

Lisa made a motion that the Board authorize the spending of up to an additional $7,000 to support a spring musical, including hiring Adventure Theatre to organize and produce the musical.  Joanna seconded the motion.  The motion was approved unanimously.

b.  Update on Renovation and Swing Space Options.  Maggie reported that Jan 21st is the target for DCPS to announce its decision.  Discussion ensued regarding the potential need for a community meeting on the calendar to address questions that will inevitably arise from the decision.  In order for that meeting to be productive, it will likely be a week or two after the decision is unveiled.

Martha noted that ANC 3E has meeting on Thurs (1/14) at 7:30 at Embassy Suites in Friendship Heights and will include public input on city priorities.  Mayor Bowser is expected to attend.  There is also a 3-4G meeting in February after the decision comes out, where Mayor Bowser is expected as well.  That meeting will be held at the Chevy Chase community center.

a. 3rd Grade Recorders.  Maggie reported on the history of the recorder program (by which all third graders learn how to play recorders in Music class).  In order to ensure it actually happens every year, the HSA specifically budgeted $400 to pay for 3rd grade recorders.  However, in order to acquire decent recorders for every third grader that they can keep and it will cost an additional $200.

Lisa made a motion that the Board authorize the spending of an additional $200 to buy recorders for the 3rd graders.  Karissa seconded the motion.  The motion was unanimously approved.

Martha adjourned the meeting at 8:30 PM.