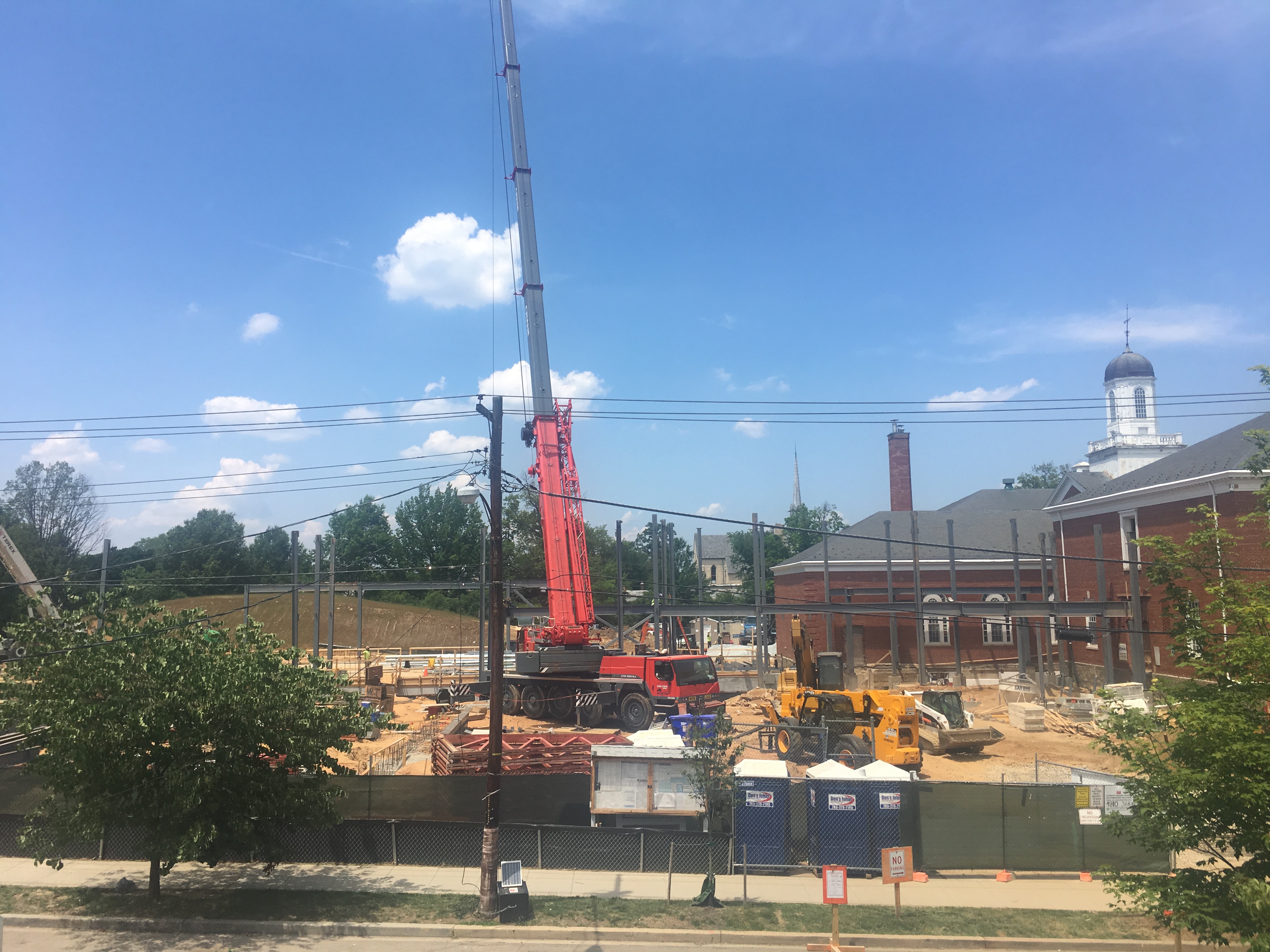 As we finish our first year of Murch@UDC, it is a good time to check in on construction of the renovated and expanded Murch@36th Street. Excavation and remediation are complete. The project has all permits necessary and has cleared all major administrative reviews. The construction site is busy with cranes helping to erect steel supports for the new addition to the school. Behind the brick walls of the original school building, classroom walls are starting to go up. Most importantly, construction continues on schedule for completion next summer! DCPS has given the contractors a July 2018 deadline to allow time for staff to move in over the summer and families to see the renovated space prior to the start of the 2018-2019 school year.

You can see more construction photos and a copy of the latest update from DCPS to the Murch School Improvement Team here. The Murch community is grateful to the project managers at DCPS and DGS, the construction team at MCN Build, and the architects both R. McGhee & Associates and Hord Coplan Macht for their continuing hard work this year to see that the renovation and expansion project remains on-track and meets the needs of the students and staff of Murch for the future.

Many community members have noticed increased activity at the Murch @ 36th Street site. From the outside you can only see small developments, such as the construction offices set up in the Kaufman Wing and the removal of the basketball and soccer goals. But on the inside, demolition and abatement work has begun! Below is just a sample of what is happening inside as work gets underway.

If you haven’t already, please take some time to check out the exciting plans for the new Murch and other updates on the modernization and expansion of Murch! You can see the latest updates here. 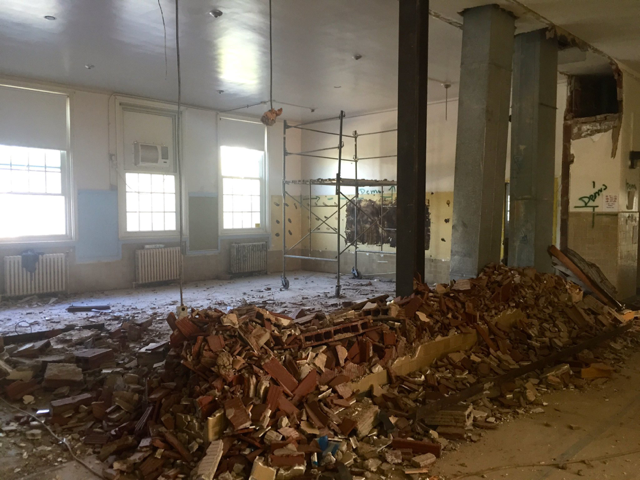 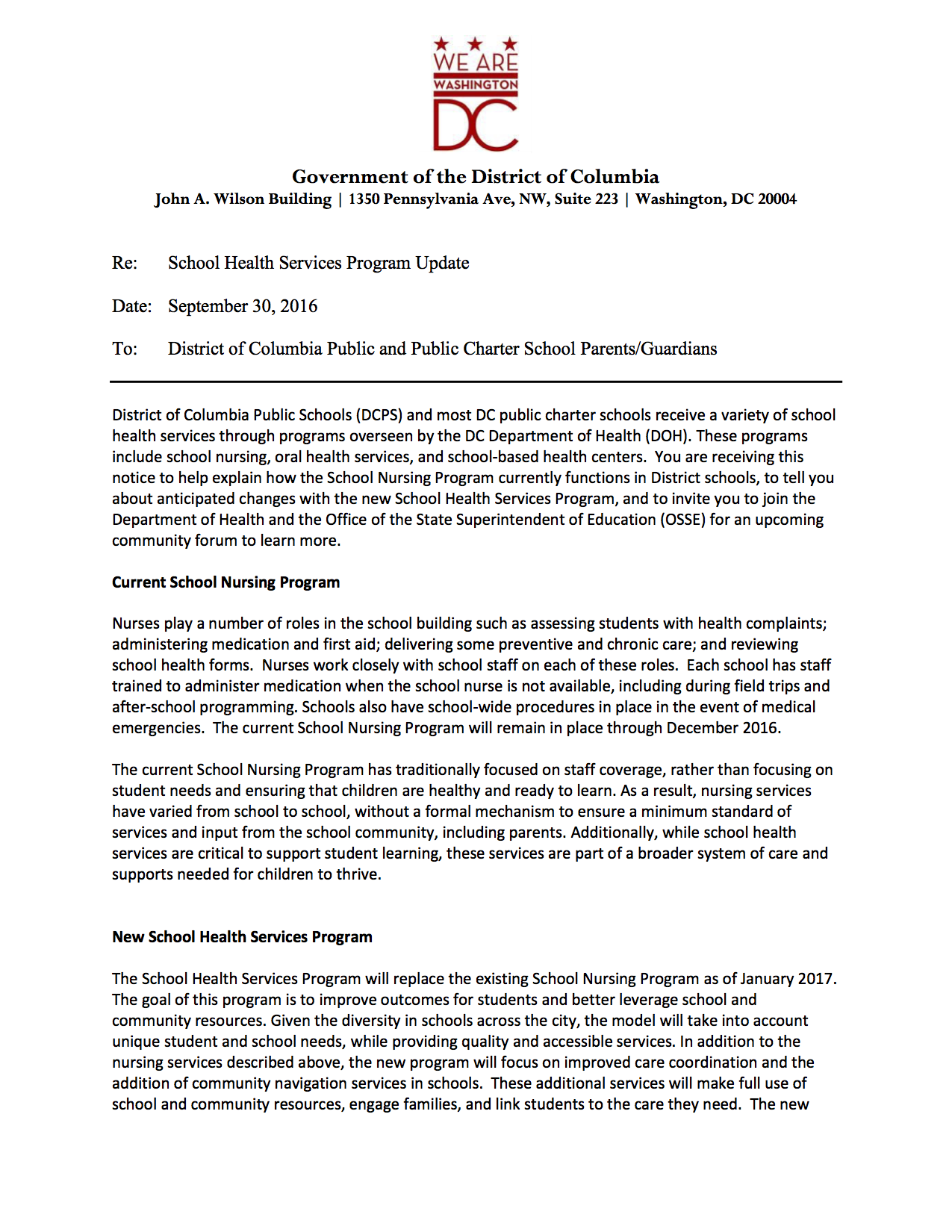 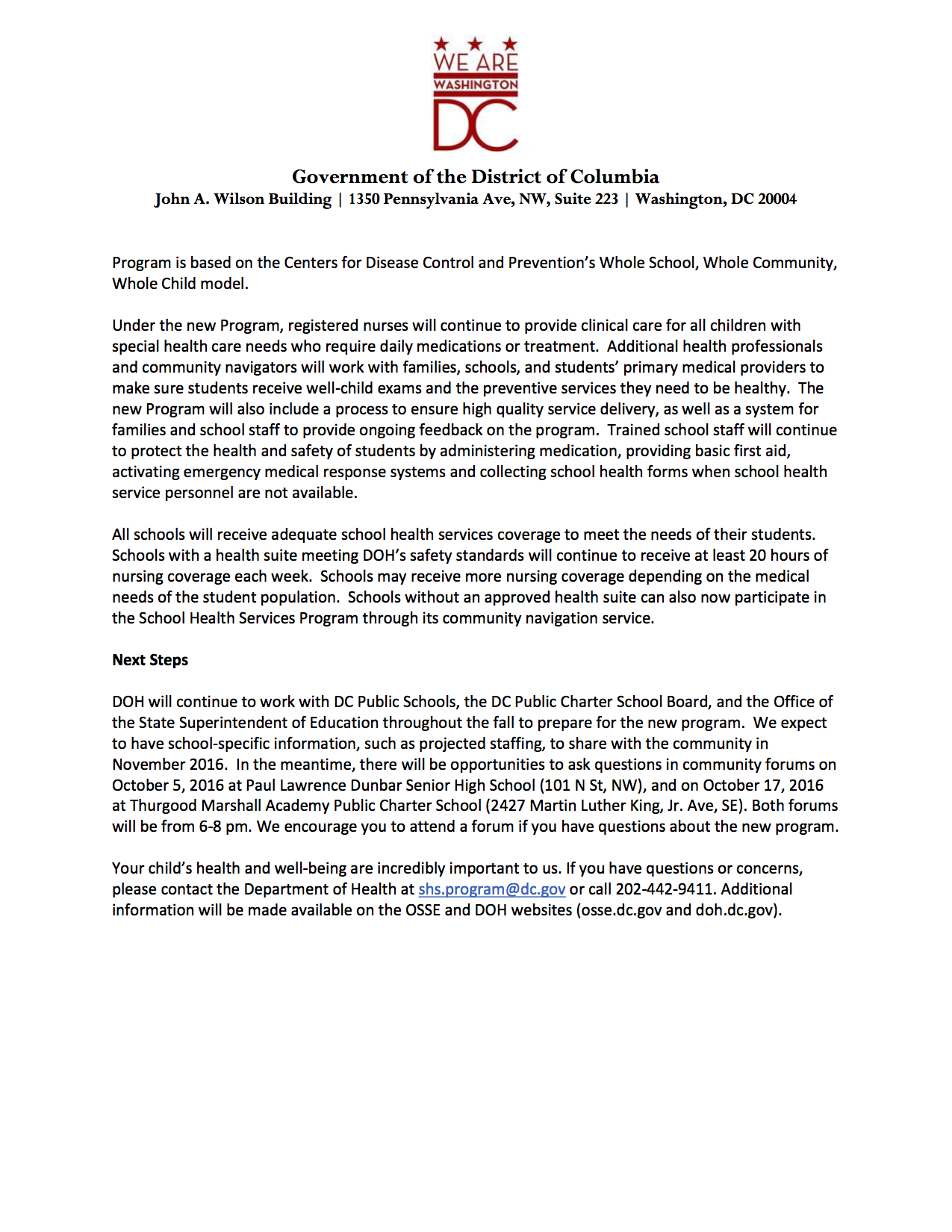 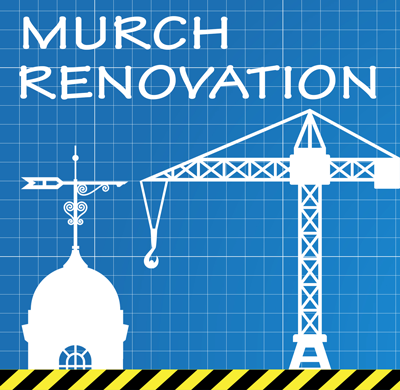 Mayor Bowser released her Fiscal Year 2017 budget proposal on Thursday, March 24. The budget proposal includes $78 million for the Murch modernization, which still leaves the project $10 million underfunded for the design that was developed last year. In an email to Murch HSA and SIT leaders, Deputy Mayor for Education Jennifer Niles stated, “I have carefully reviewed this matter and feel confident that the planned facility will be one that provides a great physical environment.” A letter from Deputy Mayor Niles to the Murch community can be viewed here. The Murch SIT and HSA responded to express disappointment in the decision, stating, “We have heard repeated promises from you, the Mayor, DCPS, and DGS that the District will build a great school for Murch with the current budget. But without enough space, they have not shown us that it is possible.”

At a Community Meeting on the Murch Modernization held Thursday evening, DCPS and DGS staff told the Murch community that they were proceeding with plans to redesign the building to fit the $78 million budget. According to agency officials, they would need to have a commitment of additional funds for the project by May 1, 2016 in order to return to the original plans and still complete the project on time. As soon as DCPS and DGS post a copy of their presentation from the Community Meeting, we will make that available here. The current, redesigned plans for Murch can be seen here, along with a comparison to the original design from October 2015.

Councilmember Mary Cheh told attendees at Thursday’s Community Meeting that she will continue to push for funds that will allow the project to proceed as planned last year (the October 2015 design). Cheh is asking the Bowser administration to find a way to fund the costs of swing space with funds separate from the capital funds allocated for the Murch modernization. Dr. Nathaniel Beers, Chief Operating Officer of DCPS, told the Murch SIT in February that the cost of the swing space would not come out of our construction budget.

Cheh also told the community that at a Council hearing on Tuesday, March 22, she secured commitments from DCPS and DGS to sit down with members of the Murch SIT and the builder to carefully review the estimates and plans for the original design. The goal of the meeting will look for true value engineering options that would not have significant negative impacts on school programming. That would allow the Council and the community to determine a more realistic estimate of the actual funding shortfall. Councilmember David Grosso, Chair of the Education Committee, also requested to participate in that meeting, “to make sure Murch is done right.”

Murch SIT Co-Chair Laura Kaiser and HSA Co-Presidents Maggie Gumbinner and Martha McIntosh testified at the Oversight Roundtable on DCPS school modernizations scheduled for this summer. The roundtable was a joint meeting of the Committee on Education and the Committee on Transportation & the Environment, chaired by Councilmember Cheh. DGS Director Christopher Weaver and DCPS Chief Operating Officer Dr. Nathaniel Beers testified at the hearing and faced many questions about the Murch project and the overall process of planning for school modernizations. The Murch community is very appreciative of the continued support and attention Councilmembers Cheh and Grosso have given to the Murch project. Video of the Council Roundtable is available on the DC Council website.

Unless and until additional funding is secured, DCPS and DGS will continue to seek regulatory approvals for the revised Murch plans. The DC Department of Transportation is scheduled to review the Reno Road curb cut and delivery entrance at an April 28 meeting. The Commission of Fine Arts and Historic Preservation Office will also be reviewing the project in April.

At a meeting on March 22, the University of the District of Columbia (UDC) Board of Trustees and DCPS reached agreement on plans for UDC to host Murch for the next two school years. The Murch community is very grateful to the UDC staff and Board of Trustees for their hard work to give Murch students a great space to attend school while Murch’s new building is being constructed.

The formal Memorandum of Understanding between UDC and DCPS will be signed in the coming days. Once that document is signed, we will make more details available to the community, including the full costs of the swing space.

More information about the plan for Murch swing space is available in on Swing Space Questions and Answers page.

DCPS and DGS will hold their next community meeting on the renovation on Thursday, March 24 at 7 pm in the gym/cafeteria “bubble” at Lafayette Elementary, 5701 Broad Branch Rd NW. They will present the latest plans at that time and will take questions and comments from the community about the plans and the status of the project. We encourage Murch families, neighbors, and community members to attend.

Please note the location change from our initial announcement. Meeting at Lafayette will give parents an opportunity to see the swing space at Lafayette and avoid a conflict with the Murch Blood Drive. The HSA still plans to provide babysitting during the event, at Lafayette. Babysitting is for Murch students only and we ask that you sign up in advance.

At a School Improvement Team (SIT) meeting this week, the architects and project managers for the Murch modernization project presented their third attempt to redesign the building to reduce the cost of construction. Like the earlier redesigns, this latest design has fallen far short of solving the problems that the community hoped to fix with the modernization. The newest version of the design includes: 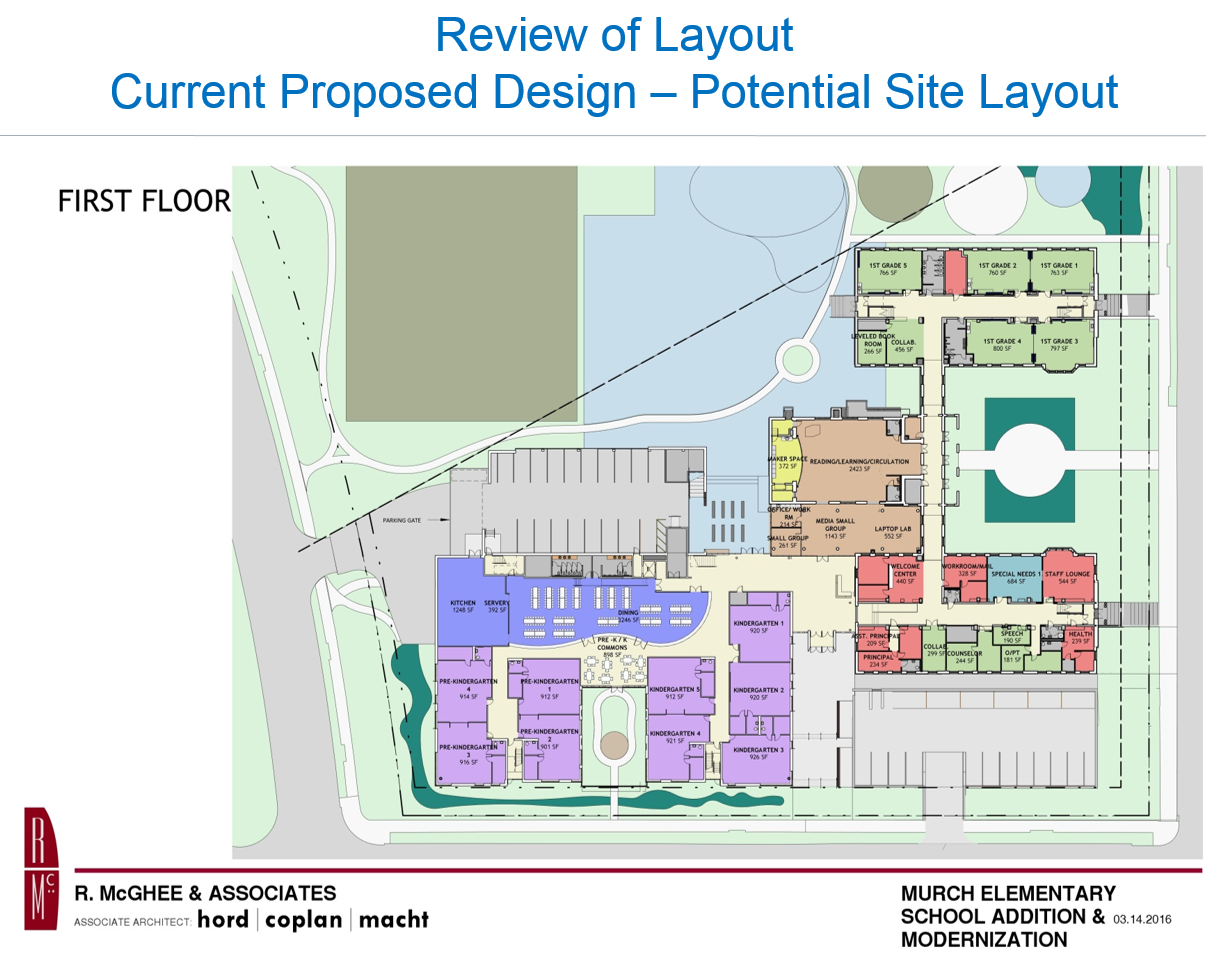 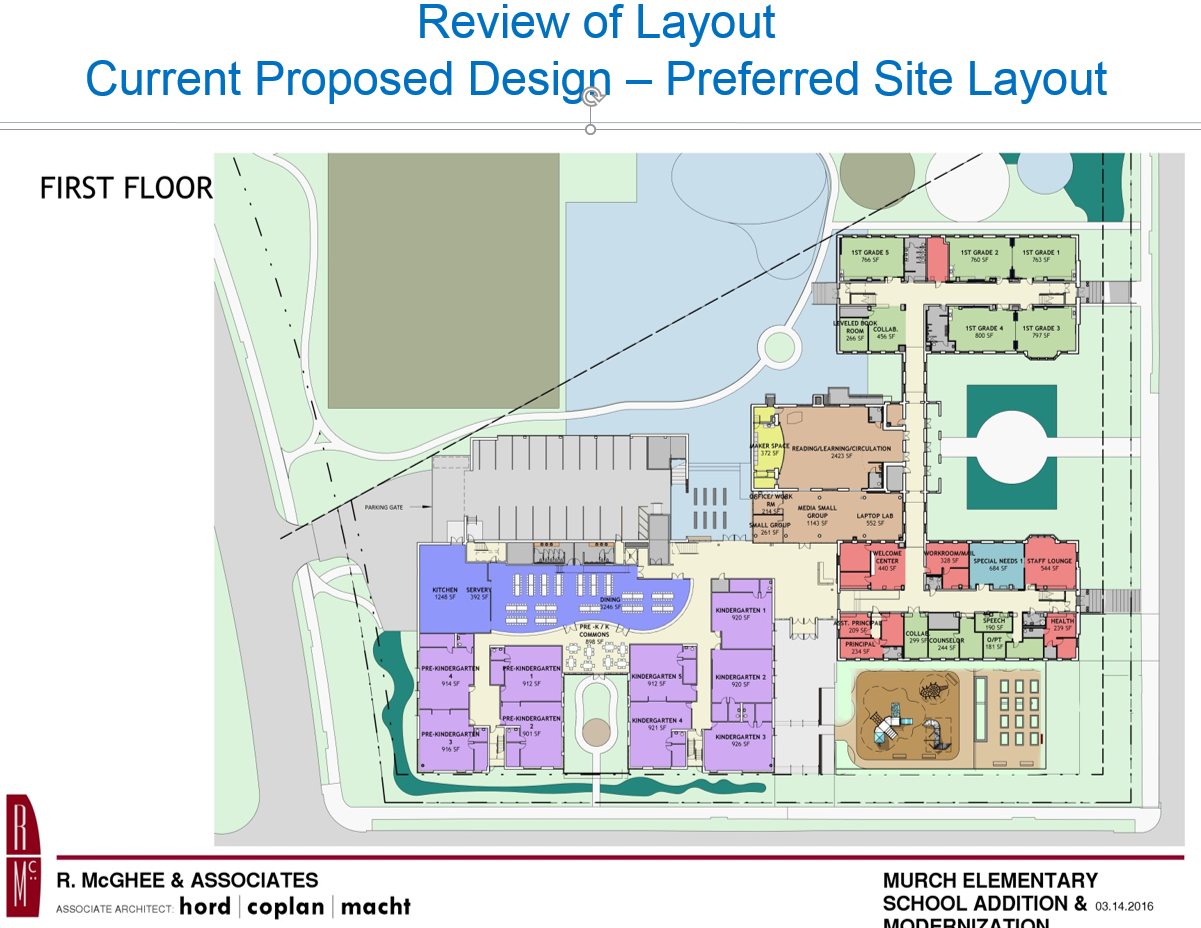 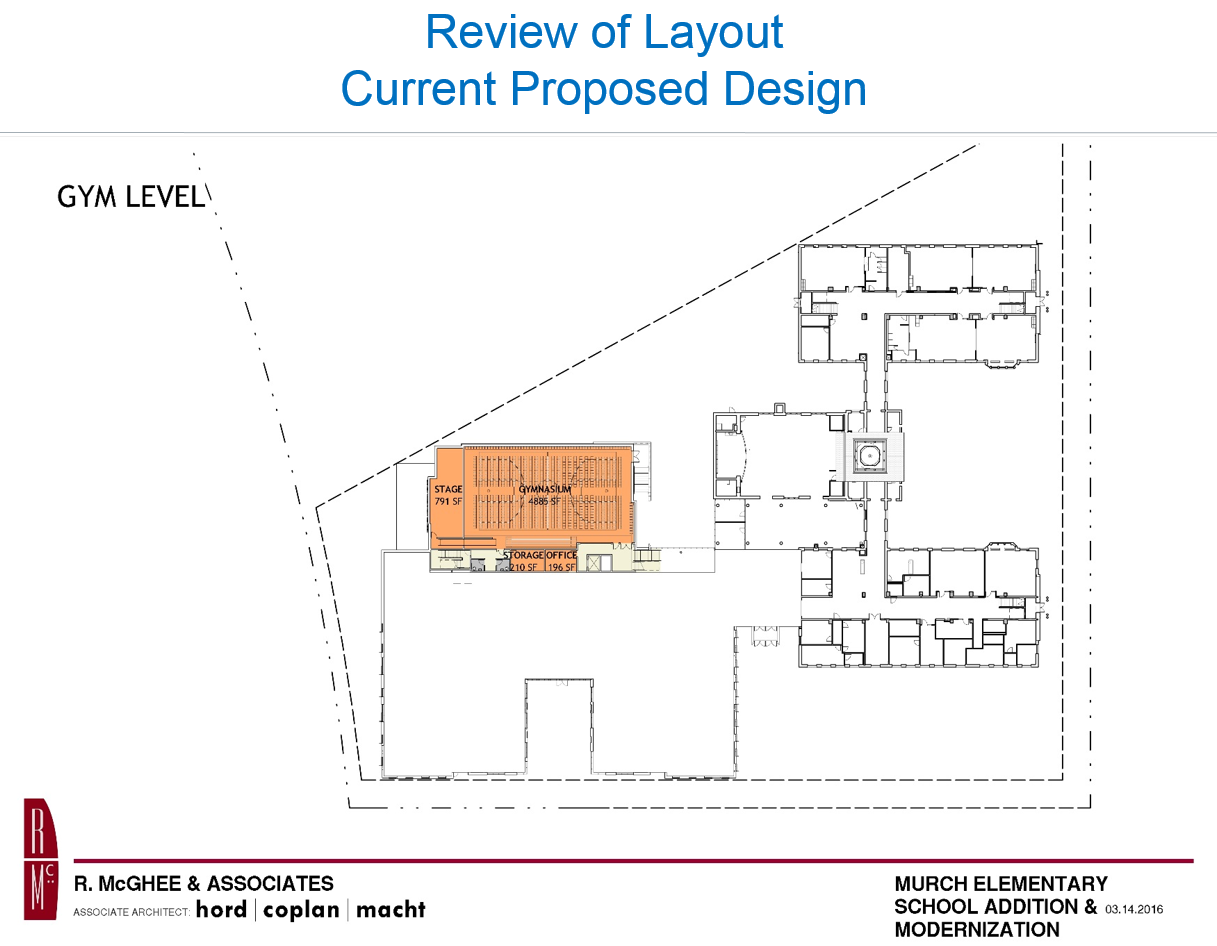 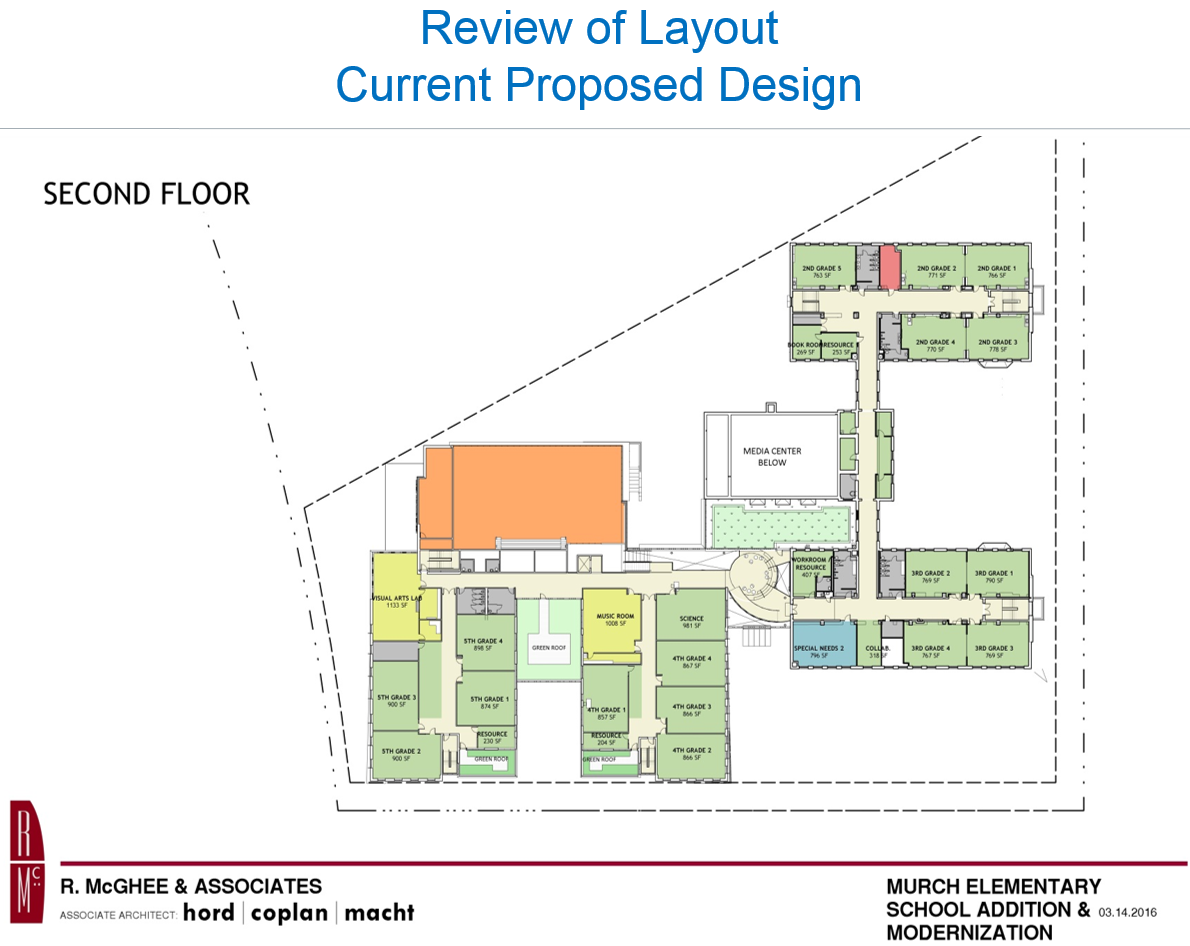 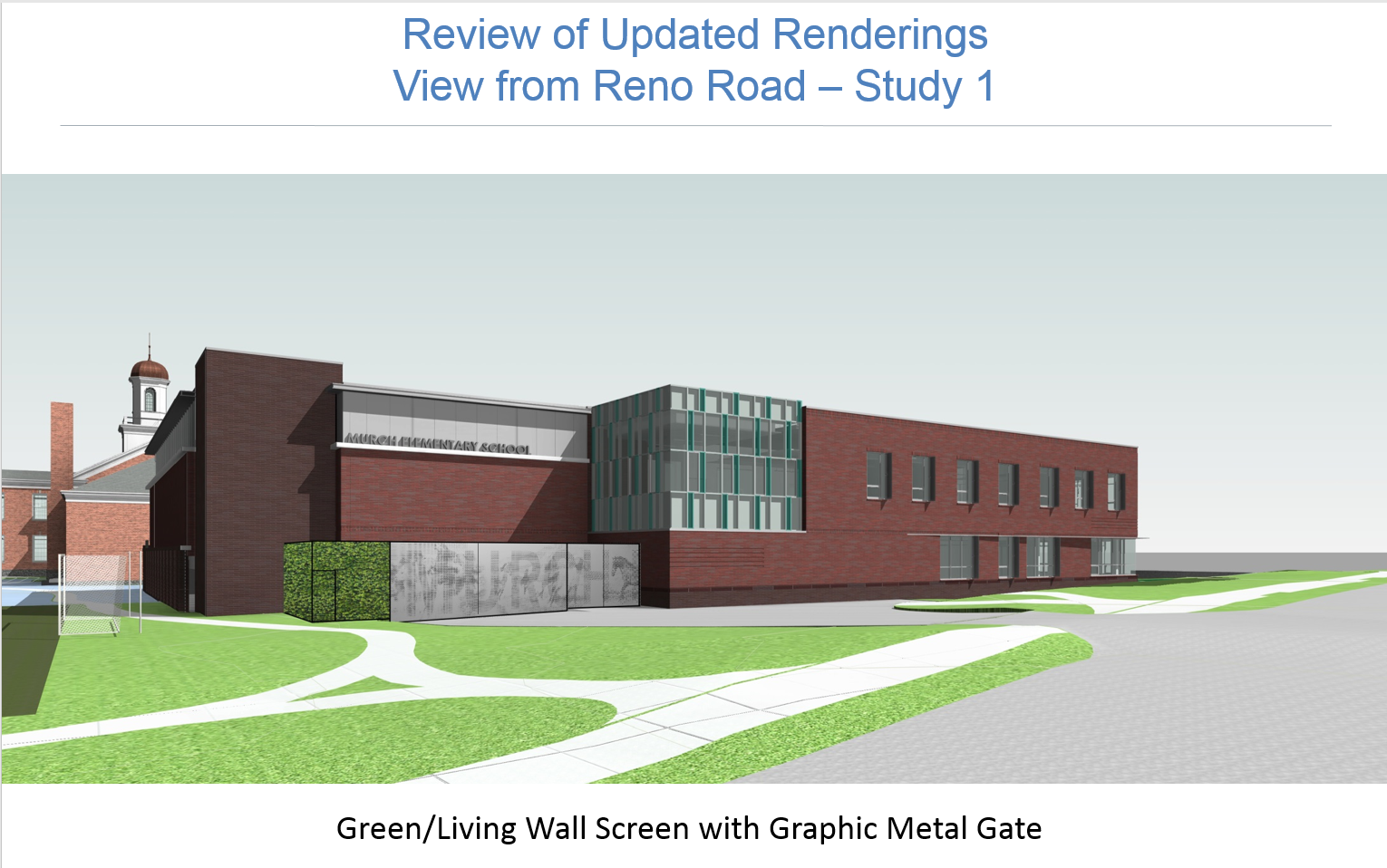 In July 2015, the SIT and the Murch community gave their support to a design plan for modernizing and expanding Murch. This design was also given preliminary approval by the Historic Preservation Review Board, the federal Commission of Fine Arts, and the National Capital Planning Commission. That original design, which the community believes best meets the needs of the school, can be seen here.

In February 2016, DCPS announced that the cost of swing space plus building the design concept that the community agreed to seven months before would be $20 million over the current project budget. The city was determined to”value engineer” more than 10% of the value of the project out of the design by taking out any spaces that were to have gone underground (the cafeteria and the parking). The architects and project managers have made three attempts to redesign the building within the cost limit. Each redesign has fallen far short of solving the problems that the community hoped to fix with the modernization.

The most current redesign of the plans for Murch was presented to the SIT on March 14, 2016. This version of the design includes:

The Murch School Improvement Team (SIT) and HSA and outraged by the way that he portrays the cuts to the project in this letter. In the letter he minimizes the effects of the cuts on our children. Here is what Dr. Beers is not telling you in this letter:

Attached are the latest drawings and renderings from DCPS showing the current redesign and the traffic study on which they are relying. These designs are undergoing constant changes as DCPS and DGS attempt to find a way to include the necessary components of the building without putting any elements underground and still get the approval of the many agencies and authorities that are required to review the project.

At this point, the SIT and the HSA do not share DCPS’s confidence that they can deliver “a world-class building” — or even an adequate one — by redesigning the building in a few short months to fit a substantially under-estimated budget. Members of the HSA and the SIT are continuing to lobby for the project to be fully funded at $88 million. We have been meeting with city officials, including the Deputy Mayor for Education, working with members of the Council, testifying at a council hearing on DGS oversight, and working with the other groups that have oversight of the project and must give approval for the project to move forward.  We will not stop lobbying the Mayor and other city officials until the project is brought back on track, and we welcome your help in doing so.

On February 25, Murch HSA Co-President Martha McIntosh testified at the DC Council Committee on Transportation and the Environment’s Hearing on performance oversight of the Department of General Services.